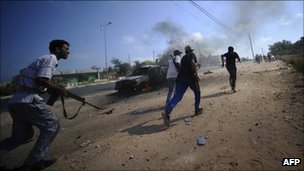 I’ve just been watching an old episode of SBS’ Insight where Rajat Ganguly said that terrorism is sometimes analysed as a type of warfare conducted in an asymetrical power relationship. Al-Qaeda didn’t have the same power base as the Western / Christian world they were rebelling against. They couldn’t wage a war on equal footing, so they resorted to clandestine, suicidal, indiscriminate attacks.

My first thoughts were to compare the recent Libyan rebellion, but as soon as I started writing this, I realised that I would fail. From the little I know, the rebels haven’t attacked innocent people. They’ve targeted the military power. The rebels haven’t used suicide attacks. In fact, the war seemed to be on equal footing.

Still, I can’t shake the feeling that we in the West are too quick to take sides, labelling one group terrorists and the other liberationists; to condemn the success of the first and to celebrate the success of the latter. We support the Libyan rebels because we believe they’re fighting for freedom, for an end to tyranny, for democracy and other values we imagine we share. We hate Al-Qaeda because they don’t share our Christian values and push a particular form of Islam. Yet we push our own form of Christianity and capitalism on them. 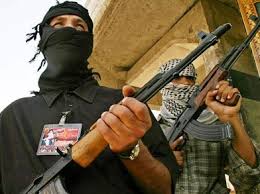 From the other side of the world, I sympathise with the rebels who are fighting for freedom from oppression, for a way of life more conducive to their own well-being. I can also sympathise with the minority – who see a corrupt world, ruled by Western infidels, and have no real power to do anything about it so lash out in the only way they can – even if I don’t agree with their vision or their methods.

Now that the Libyan rebels have taken control of their country, I hope that we in the West will allow them to find their own way forward. Democracy is an expensive form of government and does not suit everyone. I hope that the rebels will find a model of governing that fits their culture, economic position and their dreams for the future without Western influence. If they choose democracy, let them do it for their own reasons.